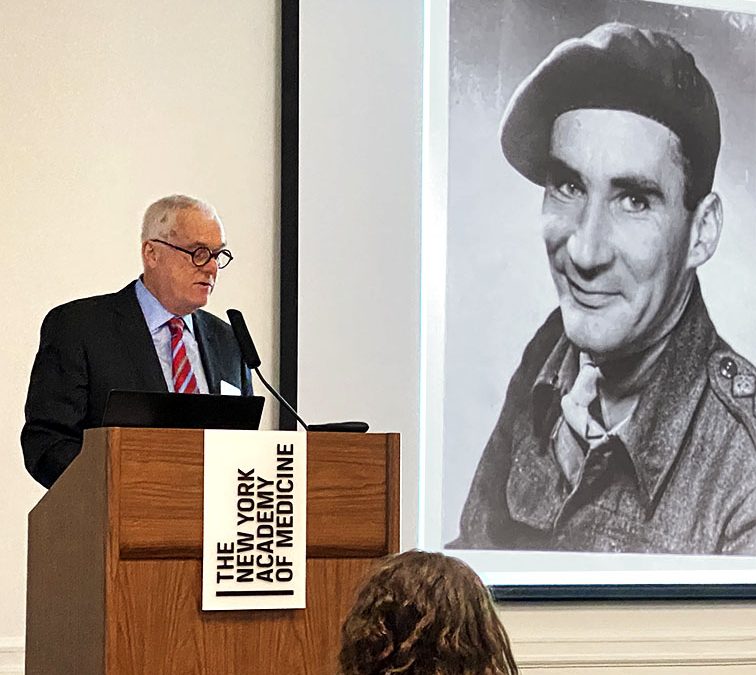 I was recently honored to present at the New York Academy of Medicine’s 11th Annual History of Medicine Night, along with five other distinguished lecturers.  My topic was entitled Bed-Sore Treatment by Suspension: A Case Report from WWII. While perusing old journals for historical tidbits on pressure injury treatment I came across the 1946 article in British Medical Journal upon which this presentation was based.

My paper recounts the story of a British physician named Captain James Fulton Neil who endured several bloody battles including Anzio and Normandy to participate in the post-war occupation of Germany.  To complete the story of Captain Neil, his descendants kindly shared his war diary which recounts his treatment of both Allied and German soldiers as well as concentration camp survivors.  As a medical officer in the German town of Eckernförde on the coast of the Baltic Sea he observed a pressure injury therapy developed by the Nazis that utilized a suspension apparatus with wires inserted into the pelvic bones of a wounded soldier.

Schematic diagram of German suspension method for bed-sore treatment, based on the photograph published in BMJ.

Since its founding in 1847 the New York Academy of Medicine has been a vital source for both thought and action regarding the healthcare and public health problems that affect people in New York City and beyond. A major focus of the Academy is the history of medicine, and its building on 1216 Fifth Avenue houses a world-renowned collection of manuscripts, archives, and reference materials about the history of medicine.

As a Fellow of the Academy since 1990 I’ve had the opportunity to participate in the Academy’s programming and use their historical resources to delve into the amazing history of wound care from ancient Egypt to the 20th Century.  Watch for my paper which recounts the story of Captain James F. Neil and the German suspension method in an upcoming issue of Advances in Skin & Wound Care.