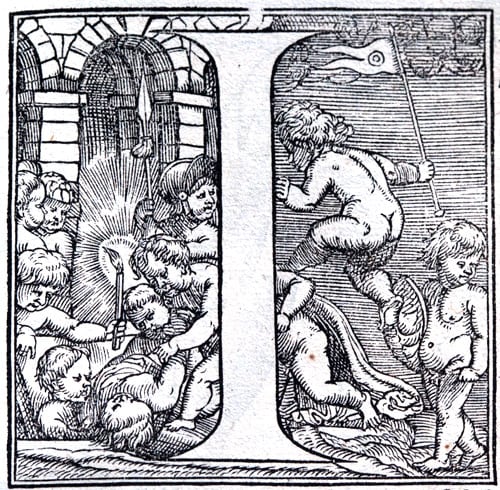 This is another post to mark the 500th birthday of Andreas Vesalius, author of the great anatomy text entitled De Humani Corporis Fabrica (On the Fabric of the Human Body) – the lavishly illustrated masterpiece that combined art and medicine. The Fabrica will be 472 years old this year, and in this post I will reveal a previously untold secret from inside the book – a story from Jewish history that to my knowledge has never been noted by scholars of Vesalius, but was hiding in plain sight for almost five centuries.

I am a lifelong fan of Vesalius, and after graduating medical school I traveled to Padua, a town in northern Italy just outside of Venice, to walk in his footsteps and see the university where he wrote his famous work. Some years later while browsing a friend’s bookshelf I came across a work by Rabbi Immanuel Jakobovitz entitled Jewish Medical Ethics. Inside I found a passage that left me shaken. Jakobovitz discussed the Jewish community near the medical school at Padua and pointed out that because of the Jewish law that required speedy interment of the dead, their bodies were favored by anatomists. I was shocked as I realized that the great master Vesalius and his students had most likely dissected stolen Jewish bodies, and the illustrations in the Fabrica might have been drawn from these dissections. The often repeated legend states that early anatomists used executed criminals, but it made sense that freshly buried Jewish bodies would make equally choice subjects.

I searched through the available translations of the Fabrica and carefully read Vesalius’s biography, but nowhere is it explicitly stated that he used bodies purloined from Jewish cemeteries. However, historians didn’t look in the right place, for within the Fabrica’s art this fact is revealed.

Like many books printed in the Renaissance, the Fabrica features historiated initials – large embellished letters that begin certain paragraphs. They are called “historiated” because they tell a story. Over the years I had seen a few of the Fabrica’s initials but never had the opportunity to study them closely. I always had a feeling that these letters could yield clues to the question of Jewish grave robbing.

I recently had the opportunity to examine original copies of the Fabrica in the Rare Book Room of the New York Academy of Medicine. I was accompanied by my colleague, the scholar and historian Michael Nevins, with whom I am collaborating on a different topic related to the famous text. To study the historiated initials, I photographed each of them and examined the images in my home.

There are three themes that run through the intials: medical care, preparation of human anatomical specimens, and dissection of animals. Most of the scenes are acted out by putti – chubby naked boys who play the roles of doctors, students, soldiers, and priests. The singular of this Italian word is putto. Historians theorize that at least one set of initials was probably drawn under the supervision of Vesalius by Jan Stephan van Calcar, a student of Titian and the same artist who drew the more famous anatomical dissections.

One initial, the large historiated “I” reproduced above, caught my attention. This initial is larger than most of the others because it introduces one of the seven books rather than a paragraph. It depicts a night scene, and a group of putti are robbing a grave to obtain a body for the anatomy table. One putto holds a candle while two stand guard and others simply watch. One guard has a shield and the second wears a helmet and holds a spear, and their presence infers that the activity is sanctioned by the authorities. The helmeted figure appears distracted as he looks up to see an intruder – a flying putto descending from the sky. In the hand of the flying figure is a pennant, and on the pennant is the letter “O.” Scholars have never explained the meaning of this scene. 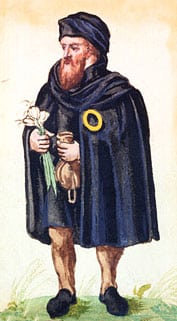 I looked at this figure for some time and suddenly realized that the “O” could be the key that reveals the putti are indeed robbing a Jewish cemetery. I did a quick internet search and confirmed my theory. During the late Middle Ages and the Renaissance the “O” was a well recognized symbol of the Jew, mandated by the authorities to wear on their clothing to set them apart in society.

Dr. Flora Cassen is a historian who teaches at University of North Carolina at Chapel hill, and completed her dissertation on discriminatory marks the Jews were compelled to wear in 15th and 16th Century Italy and other countries in Europe. She points out that a Jewish badge in the form of a thin circle of yellow cloth was imposed by the Senate of Venice in 1374, and became the mark of the Jew in northern Italy until the sixteenth century when the authorities changed the “O” to a yellow hat. These laws were a form of sartorial discrimination to construct boundaries between Jews and Christians and implement a social order in which religious groups were separated. Four hundred years later the yellow badge was reintroduced by the Nazi regime, but the shape was changed to the Star of David that came into common use as a Jewish symbol in the 19th Century.

The secret of the historiated “I” in Andreas Vesalius’s De Humani Corporis Fabrica is now revealed. The group of putti are protected by guards in a Jewish cemetery, stealing a recently buried corpse for dissection. A putto carrying the symbol of the Jew flies into the scene in protest, directly confronting the authorities who sanction the sacrilegious act. The Jewish body was certainly used for anatomical study, and might have become immortalized on the illustrated pages of the Fabrica.

I am publishing this story on the eve of the Jewish New Year as it shares a connection with the cycle of life, death, and renewal that is one of the themes of the holiday. There is a tradition in this season to visit the graves of relatives and leave a stone, perhaps with the intent of warding off robbers. Who can comprehend the compounded grief of having a loved one pass on, then end up on the anatomist’s table during the time of mourning? Such was the travail of the Jewish community of Padua, and the story is now evident in the historiated “I” of the Fabrica — in the year that marks the 500th birthday of Andreas Vesalius, and according to Jewish tradition, the 5775th birthday of the world.

The historiated “I” above was photographed directly from the 1543 edition of the Fabrica owned by the New York Academy of Medicine. I am indebted to Arlene Shaner, Acting Curator and Reference Librarian for Historical Collections at the Academy for her assistance in viewing these books.

The illustration was downloaded from Encyclopedia Judaica and features a 16th century Jewish man in Worms, Germany.