Falls are a major problem in geriatric patients.  As persons age, falls and their consequences become increasingly more serious.  According to the American Geriatrics Society, for those over age 65 and over, 35 to 40% of community dwelling persons fall annually.  As people get sicker and more debilitated, fall incidence increases as well as their severity.  Persons in nursing homes have a rate of falling three times that of community dwelling elders.  Minor fall-related injuries include bruises, hematomas, lacerations, and skin tears, while major injuries include fractures and head injuries.  Falls are a common cause of injuries leading to nursing home admission, hospitalization and death.

Today’s society is experiencing unprecedented growth in the aged population which is drawing increased attention to the ills of growing old.  In the last two decades hundreds of research studies have appeared on falls, and fall-related injuries have become a growing issue resulting in lawsuits.  Industries are developing around falls including safety devices such as hip protectors and various types of alarms.  Fall-related injuries in hospitals have drawn the attention of the Centers for Medicare and Medicaid Services, which has put them on the “no-pay” list because they are sometimes preventable. 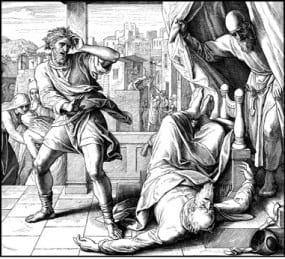 The reality is that injurious falls in old people have been recognized for millennia.  The first fall-related death may have been recorded in the Bible, in the Book of Samuel.  The event occurred after the defeat of Israel by the Philistines, when the Holy Ark was captured.  A survivor from the tribe of Benjamin ran from the battlefield to inform Eli of the terrible news.  Eli was an elderly priest and one of the last Israelite Judges, and the Bible sets the stage by mentioning that Eli was 98 years old and blind.  Chapter 4, verse 18 continues the story:

“As soon as he mentioned the ark of G-d, Eli fell backwards off his chair, breaking his neck, and he died, for the man was old and heavy.  He had judged Israel for forty years.”

Several medical factors may have played a role in Eli’s fall and subsequent death.  Risk factors for falls include sensory disorders and neuromuscular diseases.  Eli is described in the Bible as not only blind, but “his eyes had become motionless.” (Sam 4:15).  That the Bible makes this point may indicate the presence of opthalmoplegia.  This is paralysis or weakness of muscles controlling eye movement, and is caused by a variety of conditions such as thyroid disease, diabetes mellitus, tumors, and other degenerative neurologic illnesses. These diseases can be associated with problems with balance, thus increasing instability when sitting in a chair.

Risk factors for falls also include neurological disorders and cardiovascular disease.  When hearing the bad news, Eli may have suffered a stroke or cardiac event that caused the fall and neck fracture.  Cardiovascular events may have included vasovagal syncope, arrhythmia, or myocardial infarction – any of which could decrease blood flow to the brain resulting in a fall.

Eli is described as being “heavy.”  The literal interpretation is that he was overweight – a risk factor for diabetes, hypertension, stroke, and cardiovascular disease.  However, a thirteenth century commentator had an alternate explanation.  Rabbi David Kimchi, also called Radak (signifying a combination of his initials), was not only a distinguished Rabbi and scholar, but also a physician.  He opined that Eli was not heavy physically, but rather it was hard to move due to the weakness of old age, simulating increased weight.  This insightful interpretation brings up other major risk factors for falls: muscle weakness and musculoskeletal disease such as arthritis.  Perhaps the Radak can take the place as one of the world’s first Geriatricians.  If he had lived today, he surely would have added medications as a risk factor for falls and fall-related injuries.

Finally, elderly men are prone to thin bones, or osteoporosis.  Women get osteoporosis earlier than men because of menopause with cessation of estrogen production, yet the disease indeed occurs in men and is a major risk factor for vertebral fractures.  Osteoporosis is often underdiagnosed and underreported in elderly males.  It is certainly possible that Eli, at age ninety-eight, suffered from osteoporosis which increased his chance of having a neck fracture from his fall.

Reference for this post was the Rubin Edition of The Book of Samuel, published by Mesorah Publications.

Picture of Eli’s death was from the Biblical Art on the WWW website.