This post continues to mark the 500th birthday of the great anatomist Andreas Vesalius, whose masterpiece tome, De Humani Corporis Fabrica, skillfully combined art and medicine. Today I will discuss the enigma of the historiated V that was introduced in the 1555 second edition of the Fabrica.  It appears twice: once in the Dedication to Charles V and later at the beginning of Book 5 which presents the organs of nutrition and generation.

Historiated initials got their name because they tell a story. They have their origin in the ornamentation of manuscripts from remote antiquity. When books became popular in the sixteenth century, it became the fashion to decorate the first letter of a paragraph, page, or chapter with an elaborate picture which often contained subjects and scenery interlaced with the letter, and told a story related to the text. Such is the case with Andreas Vesalius’s book, published in Basel in 1543.

The second edition of the Fabrica published in 1555 contains a new historiated letter V that has never been adequately explained.  It may be a reference to Holy Roman Emperor Charles V, who granted permission for publication of the Fabrica and for whom Vesalius became a court physician.  The V may also refer to the 5th book on the organs of nutrition and generation where it appears.  This letter is strikingly different from the others because it does not have a scene depicting medicine and the study of anatomy.

The historiated V depicts a page from Greek mythology: the contest between Apollo and Marsyas. Marsyas was a mortal man, sometimes depicted as a satyr, who boasted of his musical talent and challenged the god Apollo to a flute competition. The judges were Muses – daughters of Zeus who were the personification of the arts. Marsyas lost, and as punishment for challenging him, Apollo tied him to a tree and skinned him alive. The scene shows Apollo with his signature head wreath cutting Marsyas’s skin as he dangles from a tree. The flutes and Marsyas’s clothing lie at their feet. In the background the flute contest is taking place, and on the left appear two Muses. This theme featuring the flaying of Marsyas was common in Renaissance art. Invariably the face of Apollo as he cuts Marsyas is impassive and devoid of emotion, while Marsyas struggles in pain.

Why was this classical story introduced into the second edition of the Fabrica? Scholars note that the historiated letters reflect subthemes, and understanding of one can lead to enlightenment about another. The large historiated Q, reproduced below, depicts a group of putti, or chubby naked boys who most likely represent medical students, dissecting a live pig that is tied and chained to a board. Perhaps the artist, in protest of the cruelty to animals represented elsewhere in the book, chose to get even by depicting a human treated in similar fashion.  While the putti are placing a knife to the pig’s neck, Apollo is doing the same to Marsyas.

A more commonly accepted explanation is that this scene of Apollo and Marsyas represents vengeance upon those who questioned Vesalius. Because he criticized Galen, whose anatomical opinions were unquestioned for generations, Vesalius had some fierce detractors. The artist might be saying that Vesalius is the new god, and opponents with the hubris to challenge him will suffer a terrible fate. Still another explanation could be that Marsyas is representative of Vesalius, who challenged the gods and is suffering from the criticism of his teachers and peers.

Whatever the explanation for the historiated V, the answer is lost to history. Little is known about who did the artwork, and no one knows for sure why many of the historiated initials were recut for the 1555 second edition. Classical mythology was frequently used as allegory in Renaissance Europe, and mythology in the ancient world was considered symblic of human nature. While myth is often equated with falsehood, there is ample room for rational analysis, and many myths contain kernels of truth. In the 500th year of Vesalius’s birth, the historiated V in the De Humani Corporis Fabrica remains an enigma, and the truth behind its symbolism may never be known. 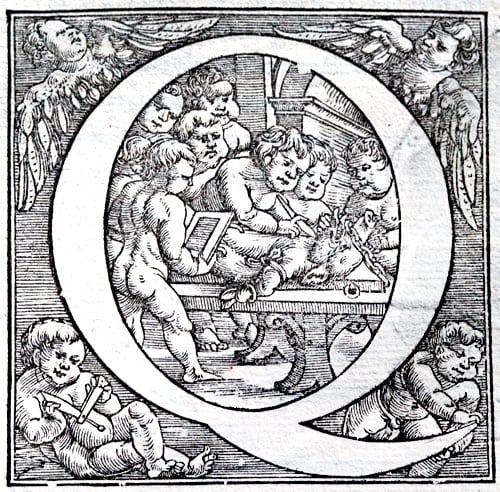 Both pictures of the historiated initials were photographed directly from the original books in the Rare Book Room of the New York Academy of Medicine.  I am indebted to Arlene Shaner, Acting Curator and Reference Librarian for Historical Collections at the Academy for her assistance in viewing these books.