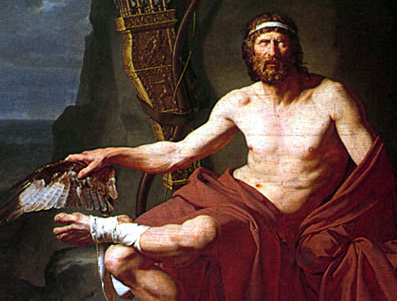 Philoctetes fanning his malodorous foot wound with the wing of a bird in a painting by Jen-Germain Drouais, 1788.

The fascinating history of wound care dates back to the earliest human cultures, where prehistoric bones and cave paintings left hints of wound-healing knowledge.  A major problem associated with wounds is odor, a phenomenon recognized for millennia.  In today’s practice, when examining and documenting wounds, the standard of care requires noting the presence of odor.   Odor associated with a wound can result from necrotic tissue and metabolic by-products of certain bacteria.  Pseudomonas, for example, can yield a fruity scent, while anaerobic bacteria emit a foul smell.

Any chronic wound can emit odor, including pressure ulcers, and wounds associated with vascular disease and tumors.  Wound odor can cause psychological distress and lead to social isolation and depression in addition to morbidity associated with infection.  Many products and techniques are recommended to fight the odor of wounds, including topical and systemic antibiotics, debridement of dead tissue, and compounds containing silver or charcoal.

The phenomenon of wound odor was well documented in Classical Antiquity and writings of the ancient philosophers.  For example, one episode from the Iliad of Homer which took place in the 12th or 13th century BC concerns a malodorous wound.  Philoctetes was a Greek hero who set out to win the hand of Helen of Troy – the most beautiful woman in the world.  On the journey he suffered a wound to his foot which emitted such a foul odor that his fellow soldiers left him stranded on the island of Lemnos, where he remained for ten years.  Later, the Greeks realized they needed Philoctetes’ skills in battle to conquer Troy, and Odysseus sent a band of soldiers to retrieve him and help him to heal.

The suffering of Philoctetes was dramatized in a play by Sophocles, written in the 5th century BC.  In this drama the stranded warrior is approached by the emissary Neoptolemus who finds him suffering with a nonhealing, malodorous wound.  Philoctetes cries to his visitor, expressing his pain and hopes for a cure:

Nor from my wounds the noisome stench deter
Thy generous heart. I have a little respite;
Help me, my son I I’ll try to rise; this weakness
Will leave me soon, and then we’ll go together.

When Neptolemus offered Philoctetes a remedy, he jumped at the opportunity:

There is a plant
Which to my wound gives some relief; I must
Have that.

Philoctetes’ wound healed and he lived to fight with Odysseus’ troops in the conquest of Troy.  He was one of the soldiers chosen by Odysseus to hide inside the Trojan Horse, and killed many inhabitants of the city.

References for this post include The Epic of Medicine by Felix Marti-Ibanez, MD Publications 1962, and The Healing Hand: Man and Wound in the Ancient World by Guido Majno, Harvard University Press 1975.