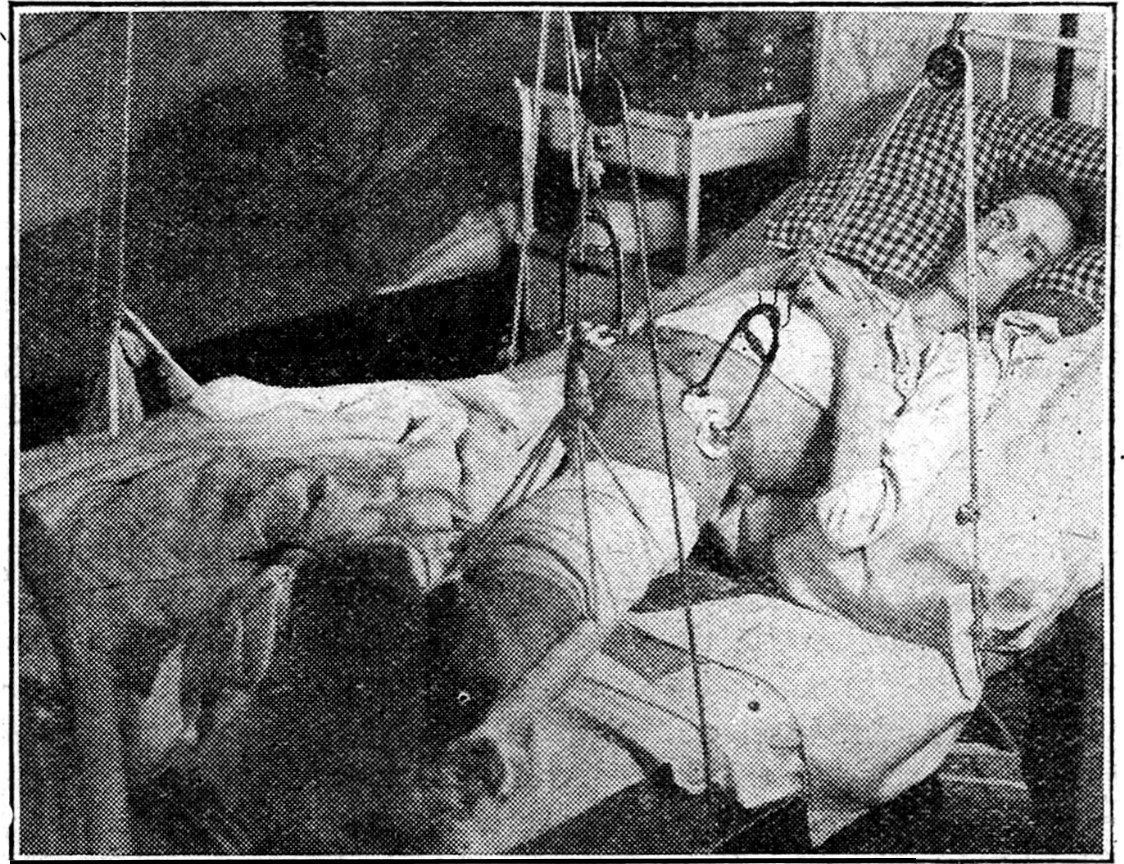 Shortly after the end of WWII, a British medical officer inspecting a military hospital in Germany observed a treatment for pressure injuries developed by Nazi doctors.  The officer’s name was Captain James Fulton Neil and his case report was published in the British Medical Journal along with a photograph of the unfortunate patient reproduced above.  The treatment employed suspension by wires drilled into pelvic bones, and I discovered Captain Neil’s article while researching the history of wound care. This post is a summary of my paper recently published in Advances in Skin & Wound Care that describes the article and its historical context.

The patient was a wounded German soldier who developed a deep pressure injury of the sacrum and buttocks that failed to respond to pressure relief. The surgeons placed a wire through each anterior superior iliac spine under local anesthesia and connected the wires to a system of pulleys and counter-weights on a frame that suspended the patient three inches above the bed. Captain Neil informs us that the surgeons had used this device in other cases, and that six weeks was the maximum length of time a patient could be left in this position.

The author did not discuss complications of suspension therapy.  One would anticipate that side effects would include problems with pin insertion including pain, bone failure, infection, and complications of immobility such as pneumonia, urinary tract infection, osteoporosis, and others. Psychological complications could include sensory deprivation, anxiety, depression, and altered sleep patterns.

Although suspension therapy for pressure injuries makes theoretical sense because it completely eliminates pressure, the report cannot be taken out of context of medical history under the Nazis. Practices such as forcible abortion, sterilization, and euthanasia of children with disabilities and persons with mental illness were routine in Nazi Germany. In concentration camps, physicians participated in murder and gruesome medical experiments, some of which involved wound care.

After being decommissioned, Dr. Neil devoted his life to patient care, medical education, and raising a family.  He left us with a historical footnote from WWII that adds to our knowledge of Nazi medicine while providing a perspective on today’s practices in preventing and treating pressure injuries.  For more information on this treatment, its historical context and ethical perspectives, along with biographical information on Captain Neil, please read my article in Advances in Skin & Wound Care.